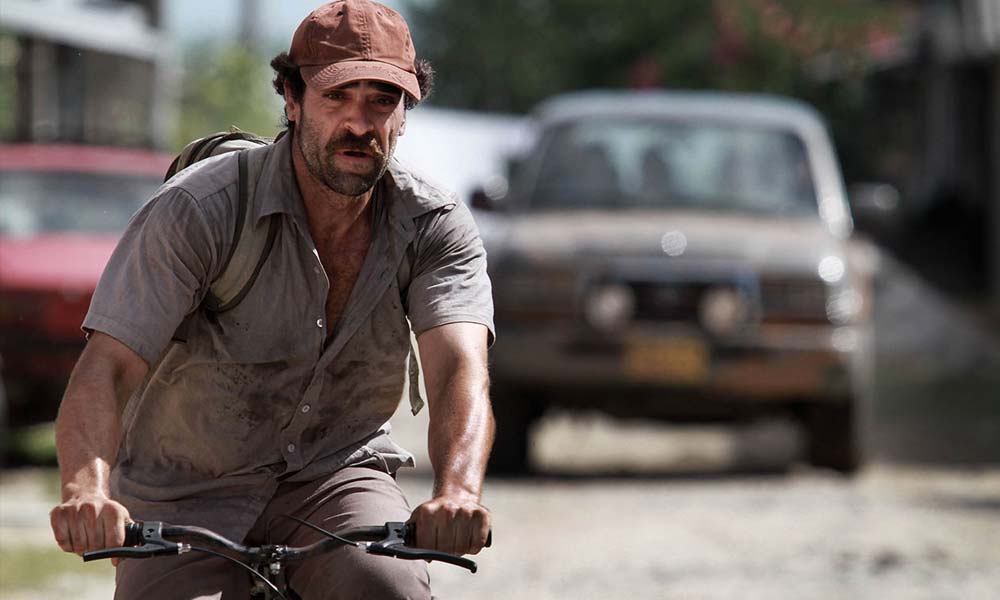 Miguel Courtois Paternina’s third political thriller after “Wolf” and “GAL,” “Operation E” reps his best. Rolling the human and the political into an absorbing whole, this grubbily authentic item about an ordinary Joe out of his depth in the hazardous world of Latin American politics is based on surreal real-life events to which it’s basically faithful, but without sacrificing twists and turns. A fine central perf from Luis Tosar goes some way toward balancing the pic’s flaws. Made for the mainstream, “Operation” should perform best in Spanish-speaking territories.

“I went into the Colombian jungle to find wealth,” explains Crisanto (a feral-looking Tosar), “but instead I found only hunger.” In 2005, living in a riverside hovel he shares with his wife, Liliana (thesp-model Martina Garcia); her faith-healer father, Don Ramoncito (Gilberto Ramirez); and a couple of kids too many, the family ekes out a living growing coca. Santos has struck up an uneasy relationship with the Farc, the military/political organization that controls large swathes of the Colombian countryside.

The Farc brings a sickly baby to Crisanto, with instructions to look after it until they return, at the same time prohibiting him from leaving the area. When it seems the baby has died, Don Ramoncito revives it using a lit cigar. Crisanto decides they must get the child to safety, and the family escapes downriver to the nearest town, where social services decide the cigar burn is a sign of abuse and take the kid away.

Unable to return home for fear of reprisals, Crisantos takes up work in the city as a laborer and caricature artist until the Farc locates him and returns him to the jungle. Tortured by military leader Mono Jojoy (Humberto Rivera), Crisantos is given three days to recover the child (called Emmanuel, hence the pic’s title).

Antonio Onetti’s script never forgets that its job is to focus tightly on generating suspense without becoming bogged down in the complexities of the region’s politics: What political tubthumping there is sounds like so much empty rhetoric. Both the Farc and the government are presented as amoral, violent and blind to the consequences of their actions, as embodied by the hapless protag and his often absurd life.

The breakneck pace is determined by Crisanto’s frenzied attempts to keep his family safe, and given that he already lives under the threat of poverty even before the Farc gets involved, he comes across as an interesting fusion of absolute wretchedness and animal nobility.

Much of the time, Crisanto is running around either escaping or pursuing, and the dependable Tosar (here revisiting Latin American politics after “Even the Rain”) does well to communicate the fullness of his character in such a breathless role, and even pulls off the Colombian accent required. That said, the fact that he represents the film’s sole dramatic focus inevitably mitigates the viewer’s interest during the last half-hour.

Apart from a slimily avuncular perf from Sigifredo Vega as Crisanto’s only useful contact, other roles are stereotyped. Most damaging in this regard is Garcia as Liliana; a well-known face locally whose participation will generate interest in Colombia, Garcia is virtually silent apart from voicing the odd complaint, and there’s practically no chemistry between her and Tosar.

Settings, whether in the jungle or cities, are often lensed handheld, adding to the general sense of urgency, though time is made for some wonderful landscapes of morning mist over mountains. Thierry Westermeyer’s gentle, guitar-based score provides a welcome, tranquil counterpoint.